Thanks to you, we finally got to “talk”.

Thanks to you, she let me know she loves me as much as I love her.

Thanks to you, she could say she would prefer to leave this world on her own terms.

Thanks to you I found the courage to see it through & the wisdom to understand the eternal circle of life.

From both of us, you will always have special place in our hearts

Cleopatra (my ever so gorgeous cat) & Angelique, from South Africa 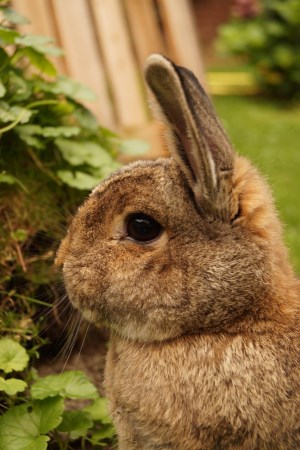 Some time ago, I got in touch with Rebecca regarding a problem with my rabbits. Rebecca spend a lot of time for us and mostly with a certain rabbit, which caused the displeasure and discussed the problem with me. We talked on the phone so that Rebecca was actually only the mediator and I could exchange myself directly. Now, I find this kind of animal communication or mediation between humans and animals the best, because I as a human could react directly to the animal and the animal could react directly to me. Altogether we talked on two appointments in order to the rabbit and me given time in between to find out if our ideas would work and give each other a feedback afterwards. We finally found a compromise and were very happy now. 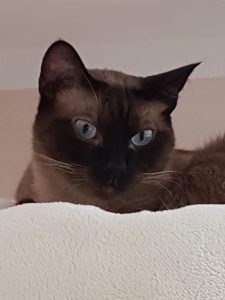 Why would one choose the path of animal communication?

What is that supposed to achieve, some might ask now. It was important for me to know, “Is my cat well or is he suffering from this certain situation”? The initial situation was as follows: He, shy, handsome tomcat, anxious, jumpy, reserved, but sweet and cuddly, hardly dared to get off his cat tree, seldomly came near me because his fear of my 2nd cat. She came, just like him, from the animal protection, but her character was very combative, dominant, possessive, jealous and scared him away at every given opportunity, jumped on him, annoyed him. Cat bullying so to speak. He was so intimidated that he was always on guard and always gave her the lead in everything. But how could this be changed? My cats can’t talk and I can’t talk to them… or can I?

That was when I met Rebecca Szrama at the fair “Heimtierwelt” in Düsseldorf. She explained to me how she contacts the animals. I was curious and wanted to find out more. We made an appointment on the phone and I prepared my questions that I wanted to ask my cat. The phone call took place in the way that Mrs.Szrama represented my tomcat by getting in touch with him and then answered my questions. Everything that happened then and what he told me made sense and opened my eyes to why the situation was so unpleasant between the two. After the phone call (it took a few days) the unbelievable happened.

My tomcat suddenly looked more confident, laying on the floor in a casual and relaxed way, even though his rival was nearby. He walked up to me by himself, even started to jump on the bed again. Before, he got beaten out of bed. But none of it. These are small changes, but for me it is a great development and I hope that one day the two will at least accept and respect each other. Thank you so much Mrs.Szrama, this was a great experience as well as a present for me. 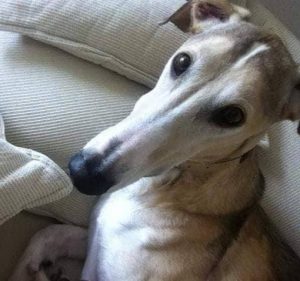 I have tried the animal communication with Rebecca for the first time and I am really very thrilled and very touched. Of course, you can be sceptical about such things, but soul communication is possible and proven – so why shouldn’t it also work with animals? Rebecca has helped me a lot – in my opinion she has clearly recognized things and connected with my animal, for which I am very grateful for. Try it yourself and get a picture of her work!

The interaction with my dog has become even more respectful, even though I thought it could not be more than it already was. 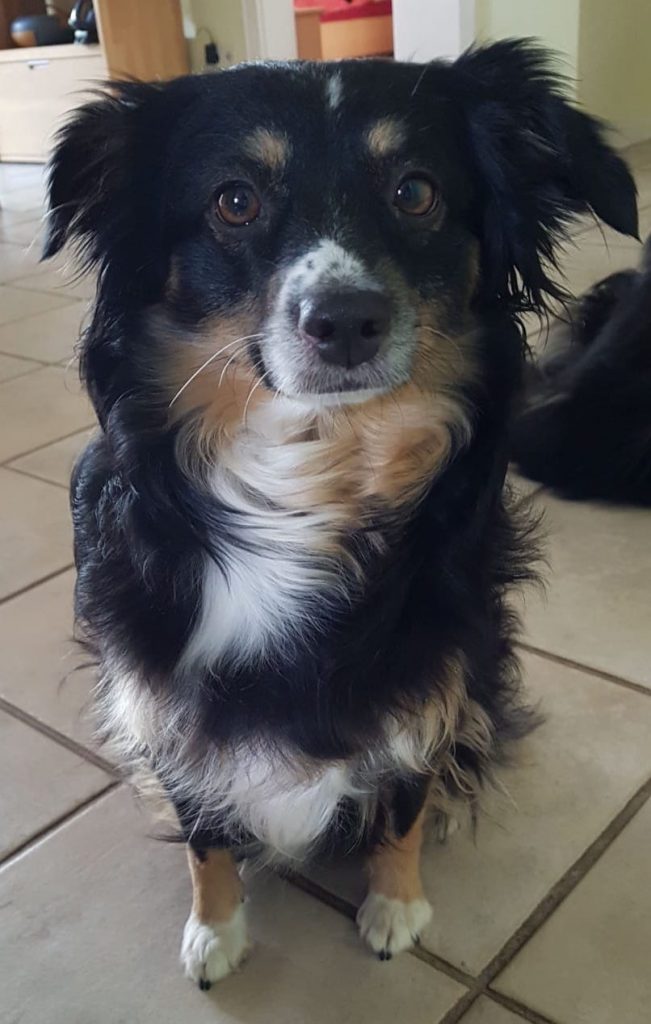 Dear Rebecca, I thank you from the bottom of my heart for your sensitive translation. It was a very nice experience for me to communicate in this way with my dog Gypsy. For one I noticed that our communication did already worked quite well, and I understand Gypsy quite well. Also, I learned a lot of new and helpful things from and about Gypsy. Our held conversation makes it easier for me and Gypsy to deal with each other. For example, Gypsy is very afraid of men. Now I know why and how I can support her. Our conversation touched me personally and set a healing process in motion.

I thank you for your clear and at the same time very empathetic nature. Glad to have met you.

Mrs.Szrama had two conversations with our dog. The first conversation focused on finding out whether the dog feels comfortable with us, how he feels when he has to stay alone and why he reacts so anxiously, suspiciously and sometimes aggressively towards strangers and dogs. In the second conversation it was specifically about a certain behaviour of the dog, which represented a problem for us (aggression towards guests).

Mrs.Szrama managed to get in touch with our “scaredy-cat.” In addition to answering our questions, she has also told us a lot about his past and we now know that his behaviour and fear are essentially the result of bad and painful experiences in his childhood as a street dog.

Mrs Szrama has taught us that the dog feels comfortable in our family, trusts us and still needs time to consolidate this trust to such an extent that he can forget the past. She was also able to tell us what was unsettling the dog within our family, so that we could adjust our behaviour accordingly.

In the second call with Mrs.Szrama I was able to interact and ask our dog questions and react directly to his answers. It was a very detailed conversation in which I again found the reasons for the aggressive behaviour of our dog towards strangers.

I have tried to mediate to our dog via Mrs.Szrama, that he has found a safe home in our family and that he is very much loved, but that we cannot tolerate his aggressive behaviour. We have therefore made an agreement in this respect. An agreement with a dog sounds somehow pretty crazy. Crazy, but successful! After the conversation, his behaviour has actually changed. It seems as if he is making an effort and somehow, he manages to neither growl at guests nor snatch them – that’s a start. Considering that many people hardly manage to change their own behaviour on the basis of an agreement, we gladly give our dog some time here.

The conversations with Mrs.Szrama has helped us tremendously in order to understand our dog.

With this, I’d like to send you some feedback. Due to your conversation with my wonderful Janka, some things have already moved into the positive for the both of us. The relationship to her is now much more intense and I have the feeling that she listens to me better because she knows that I want to understand her. I now talk to her every time before I leave the house and tell her exactly where I am going, when I will come back and that I will definitely come back again. What can I say, since then she hasn’t cried and barked to the point that her voice got raucous?

Regarding the drinking we still have to practice. That, she definitely does not do enough. Giving her just milk causes flatulence. We now want to try cat milk or lactose free milk. Also, she seems more playful and over-excited, I could hardly hold her on a leash. It is so nice to see her more active and relaxed again. Thank you from the bottom of my heart. A few things I am still somewhat uncertain, but I will get back to you. I would like to advise everyone to book a session with Rebecca, for themselves and especially for their animal. She does this with so much love.

With infinite thanks, Claudia & dog Janka

What can I say other than THANK YOU?

I’ve spent most of my life with horses and have always been able to trust my intuition and observations – but sometimes that’s just not enough! Thanks to you, I learned a lot about Gustav’s past, feelings and desires. A horse with several previous owners has already experienced a lot and you have brought a lot of light into mine and our darkness in your wonderfully empathetic way. Already the first day after our conversation in the stable was simply different. Different in so many details.

Understanding the “burden” of earlier days helps me and us every day anew. From this knowledge I draw infinite strength, patience and security to walk our path. As requested by Gustav, I now make sure getting his carrots regularly, assure him that I will never give him away and even his dream of swimming in the lake will soon come true.

Thank you again from the bottom of my heart, Theresa and my horse 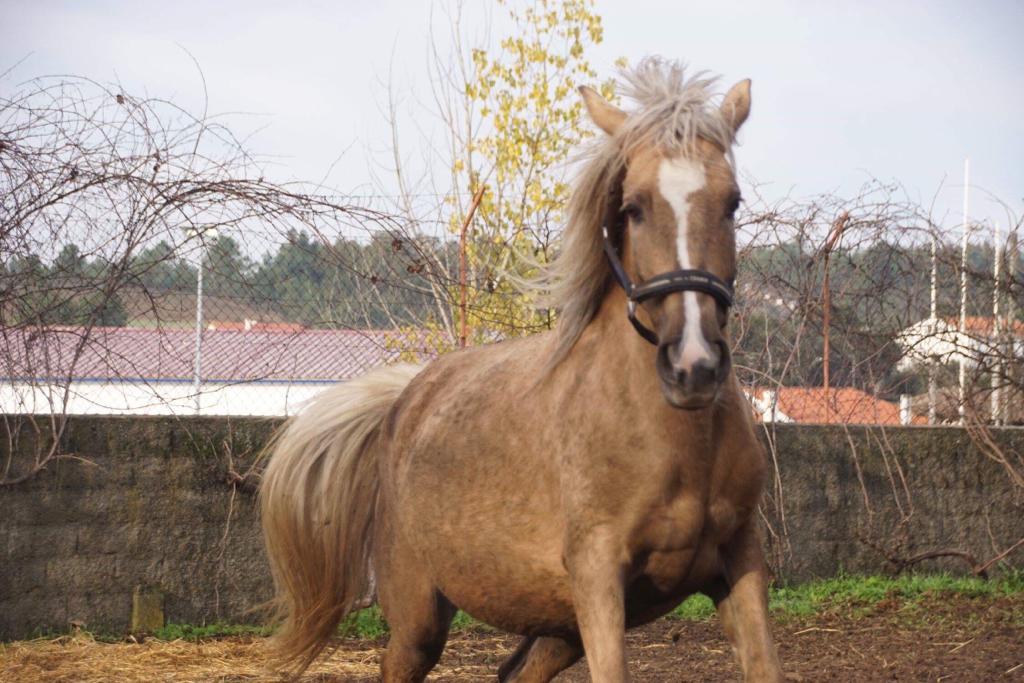